We decided to head to Liechtenstein for Columbus day weekend, but made a couple of detours in Switzerland along the way.

First stop was Rheinfall.  These are the largest falls in Europe.  They are impressive for their width more than their height. 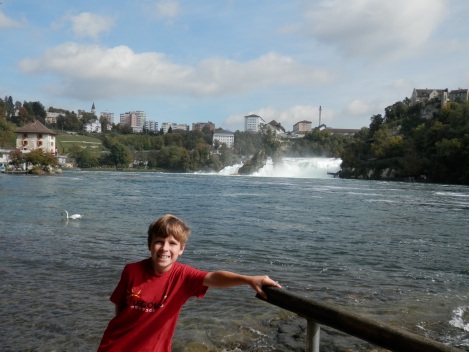 View from the hiking trail

We stopped for lunch at a restaurant near the falls. 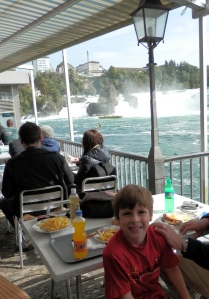 Sam having a brat, pommes and Fanta at the base of the falls.

View from the restaurant.

After having lunch, we walked the short path up to the side of the falls.  From there you can get a closer look at the falls and also at Castle Laufen which sits above the falls on the opposite bank.

View from the side with Castle Laufen seen above. 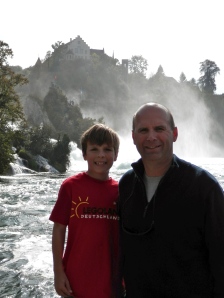 Sam and Mike beside the falls

Apparently, in the summer it is quite popular to jump from the overlook known as Känzeli at the base of the Castle Laufen.  We did not see anyone jump.  I’m very glad since a certain 8 year old boy does not need any ideas put in his head.

Next stop along the way was the beautiful town of Stein am Rhein.

There is a car park right outside the city gates, but have some Swiss Francs on hand as the machine does not take Euro or US credit cards.  If you have a European card with a chip, you can use that.  Or if, like us, you haven’t yet found an ATM, you might get really lucky and meet two very nice ladies on holiday from South Africa.  I helped them figure out how to use the machine, and they donated a couple CHF to our cause and would not even take any Euro in exchange.

The town is not very large and can easily be explored in an hour or two, or if you time it better than we did you could have a very nice lunch or dinner in one of the cafes that looked and smelled fantastic. 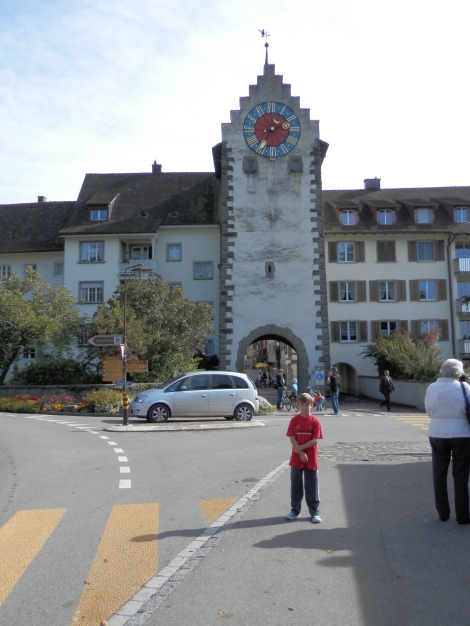 Stein am Rhein city gate from the outside

Stein am Rhein city gate from the inside.

There is a small castle on a hill over looking the city called Hohenklingen Castle.

The town is on the Rhein river.

View of the town from the river bridge. You can see Hohenklingen Castle on the hill overlooking the town.

The most wonderful thing about the town though is the frescos painted on so many of the timbered buildings in the town square.

Mike and Sam in front of the fountain

The paintings on the buildings normally illustrate the name of the house.  The artwork dates from the 16th century and is amazingly elaborate.

A fun thing about the town is the dragons that are all around.  From the water spouts on the Rathaus and other buildings to the man hole covers, dragons are everywhere.  Before realizing just how prevalent they are, I made the mistake of promising Sam $0.25, toward the purchase of a souvenir, for every dragon he could find.  I ended up owing him $9.25, and I really don’t think he even found all of them.

Last stop before making our way into Liechtenstein was the Alpine village of Appenzell.

I think the best word to describe Appenzell is unusual.  It sits in a very rural alpine setting  with farm houses on the hillside.  But the town itself is very busy.  It lacks the usual fußgänger zone (car free pedestrian area) that you normally find in European cities, so there are cars and people competing for much of the same space in the small town center.  The area has many, many cows and as a result the town has many, many flies.  The town is best known for its Landsgemeinden.  These are open air democratic assemblies held in the town square.  Men traditionally hold up a sword to vote.  The swords are passed down from generation to generation.  Women have only had the right to vote in Appenzell since 1991 and as a result only have voting cards to hold up.  One thing outlawed at a recent Landsgemeinden is naked hiking.  I found this amusing fact on our placemat at dinner and had to do some further reading online before I actually believed I had translated the German placemat correctly.  You can find a small article here… naked hiking outlawed and a local swiss take on it here…swiss article. 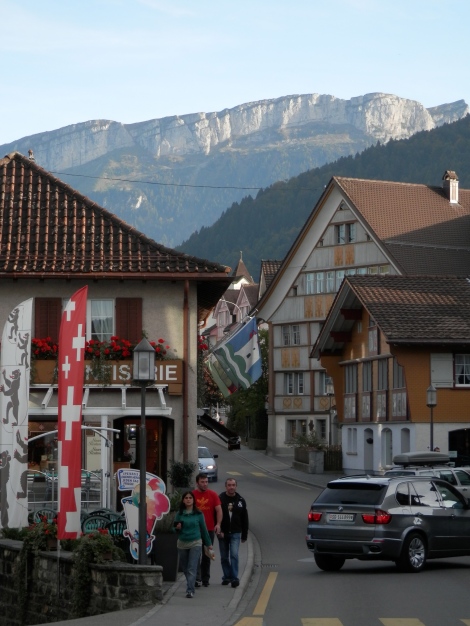 Hillside just outside of town  Taken from the churchyard. 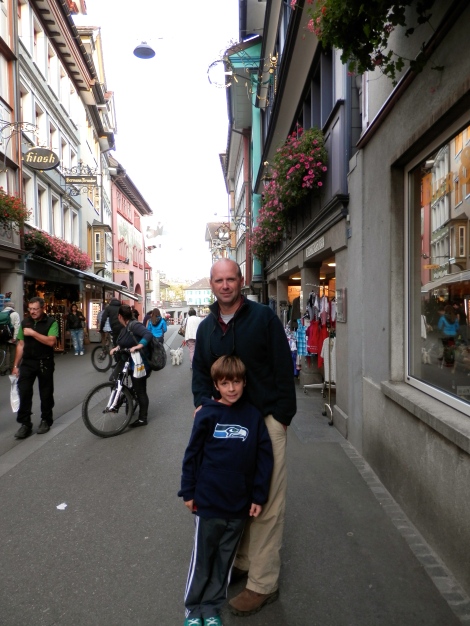 Small side note for my fellow military euro travelers… There is an Esso station right before you cross the border into Switzerland in Singen.  You have to leave the autobahn to get to it, but it’s not too inconvenient. (RADOLFZELLER STRAßE 28,  78224 SINGEN)  They take the Esso card and after filling up there we had enough gas for the rest of our weekend.  We filled up again in Lindau, Germany on the way home, so we did not have to buy any gas on the economy.